How old are young people when they start having sex? Unravelling the applicability of Cox proportional hazards regression

Purpose: How old are young people when they start having sex? Although this question is important for educators and policymakers, its answer can easily mislead due to methodology that does not take into account age-censoring and generational trends. This study investigated whether 1-year birth-year cohorts can be jointly modeled by Cox proportional hazards regression to estimate sexual debut ages and to investigate age trends for different sexual behaviors.

Method: We used pooled data from three Dutch periodic population-based surveys, for which 33,377 participants, born between 1980 and 2004, completed an online questionnaire.

Conclusion: If the assumptions are met, we recommend using the Cox regression modeling approach to estimate how old young people are when they start having sex, since this method yields precise and current debut ages by pooling information across birth-year cohorts without arbitrarily combining them in multiple-year groups. The age of first intercourse is increasing, so continuous sexuality education throughout high school is advisable, in addition to early sexuality education. 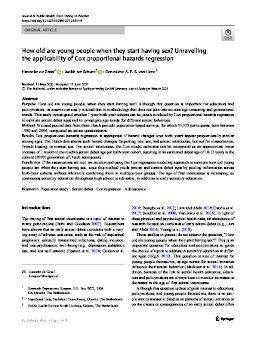