Majorizing measures for the optimizer

The theory of majorizing measures, extensively developed by Fernique, Talagrand and many others, provides one of the most general frameworks for controlling the behavior of stochastic processes. In particular, it can be applied to derive quantitative bounds on the expected suprema and the degree of continuity of sample paths for many processes.

One of the crowning achievements of the theory is Talagrand’s tight alternative characterization of the suprema of Gaussian processes in terms of majorizing measures. The proof of this theorem was difficult, and thus considerable effort was put into the task of developing both shorter and easier to understand proofs. A major reason for this difficulty was considered to be theory of majorizing measures itself, which had the reputation of being opaque and mysterious. As a consequence, most recent treatments of the theory (including by Talagrand himself) have eschewed the use of majorizing measures in favor of a purely combinatorial approach (the generic chaining) where objects based on sequences of partitions provide roughly matching upper and lower bounds on the desired expected supremum.

In this paper, we return to majorizing measures as a primary object of study, and give a viewpoint that we think is very natural and clarifying from an optimization perspective. As our main contribution, we give an algorithmic proof of the majorizing measures theorem based on two parts:

- We make the simple (but apparently new) observation that finding the best majorizing measure can be cast as a convex program. This also allows for efficiently computing the measure using off-the-shelf methods from convex optimization.

- We obtain tree-based upper and lower bound certificates by rounding, in a series of steps, the primal and dual solutions to this convex program.

While duality has conceptually been part of the theory since its beginnings, as far as we are aware no explicit link to convex optimization has been previously made. 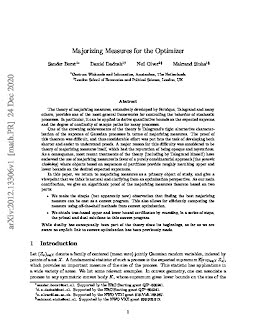