Presented at the IACR ASIACRYPT (December 2018)

At EUROCRYPT 2013, Garg, Gentry and Halevi proposed a candidate construction (later referred as GGH13) of cryptographic multilinear map (MMap). Despite weaknesses uncovered by Hu and Jia (EUROCRYPT 2016), this candidate is still used for designing obfuscators.

The naive version of the GGH13 scheme was deemed susceptible to averaging attacks, i.e., it could suffer from a statistical leak (yet no precise attack was described). A variant was therefore devised, but it remains heuristic. Recently, to obtain MMaps with low noise and modulus, two variants of this countermeasure were developed by Döttling et al. (EPRINT:2016/599).

In this work, we propose a systematic study of this statistical leakage for all these GGH13 variants. In particular, we confirm the weakness of the naive version of GGH13. We also show that, among the two variants proposed by Döttling et al., the so-called conservative method is not so effective: it leaks the same value as the unprotected method. Luckily, the leakage is more noisy than in the unprotected method, making the straightforward attack unsuccessful. Additionally, we note that all the other methods also leak values correlated with secrets.

As a conclusion, we propose yet another countermeasure, for which this leakage is made unrelated to all secrets. On our way, we also make explicit and tighten the hidden exponents in the size of the parameters, as an effort to assess and improve the efficiency of MMaps. 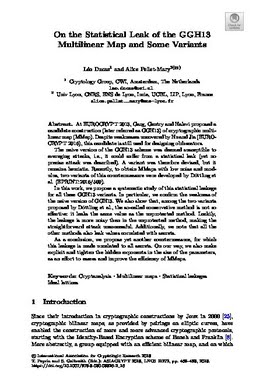